In February, 1895, in the small town of Clanton, Alabama, Manuel Dunegan was lynched. Taken to an unnamed swamp about three miles west of town center, Dunegan was hanged but little else is known about the circumstances of his death.  Dunegan’s corpse was found submerged in water more than three weeks after his death, the body badly bloated and with little physical evidence of the crime. It was reported Dunegan was threatened and killed for his knowledge of a nearby gang of burglars and hog thieves’ recent activities.[2] 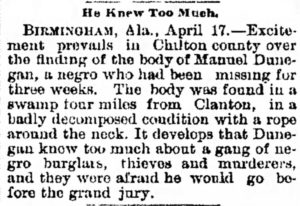 Some newspapers reported that Dunegan was hanged by a gang of black men upset that he might divulge information about their criminal activities before a Grand Jury.[3] Others state that he was involved with a “blackcap gang of burglars, thieves, and murderers” that eventually turned on him.[4] While theoretically possible, such a story of black-on-black crime is unlikely as nearly every lynching in the state was performed by white men.  Instead, the narrative seems to be spun to disguise the identities and motives of the killers. Searching through later Chilton County news sources found no later mentions of a black criminal gang near Dunegan’s place of .[5] Many sources state that a coroner’s jury had begun investigating the case, but I found no evidence of it. It is likely that any investigation into Dunegan’s death was abandoned quickly and deemed a waste of time and resources.

Dunegan was likely working as a sharecropper or tenant farmer in the Clanton area most of his life and was reported to have had “good relations” with the white farmers of the community.[6] Because there is no 1890 federal census, I was hard-pressed to find information about Dunegan’s possible family, although I discovered that he lived with an older black woman which was possibly his mother.[7] According to this woman, Dunegan was left warnings on his doorstep ordering him to leave the county or be prosecuted by the “black cap” group that would supposedly lynch him. [8] Local and national publications stressed  Dunegan’s “good standing” in the white community as way to suggest that white citizens had a positive opinion of him and no justification for killing him.[9] 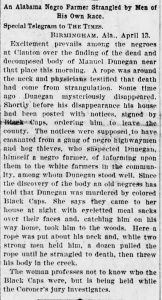 Throughout our research, the bulk of our information and leads originally came from newspaper articles around the time Dunegan’s corpse was found. I believe the newspaper databases (Newspapers.com and Chronicaling America) were the most valuable of any information sources. While the newspaper sources were useful, I did find it difficult at times to use information from them as it was be hard to judge the accuracy of the reporting through the filter of anti-black rhetoric. My largest failure was my inability to find specific details or even prove the existence of Dunegan’s family, and the location of his home. Looking through later census records, I was also unable to find any evidence of a Dunegan family in Chilton county in 1900, five years after his death. Its possible, and highly likely if they did exist, they relocated following his murder, although my research has proven inconclusive. Additionally, I would like more details of Dunegan’s relationship to the local “black cap” gang that supposedly killed him. I believe that future researches of this case could possibly find more extensive records relating to Mr. Dunegan and his death in local Chilton county records, although it is difficult to predict the level of information that would be available. When working with a research case like this, I feel the most difficult part for myself and future researches will be knowing which leads to follow, and which will lead down a rabbit hole of research.

Although Dunegan’s life and death itself did little if anything to influence the local or national conversation about black equality and black rights, it is incredibly important to remember and memorialize people such as these that represent our failures as a nation. We cannot push forward with our mission of equality and growth if we do not stop to remember the mistakes our ancestors made, even if those alive today are not personally responsible. It may seem to many that violent events occurring over a century ago are pointless to study and do not relate to society today, but there are innumerable parallels between the devaluation and murder of black Americans during the decades of lynching and current racial, political, economic, and judicial issues facing our country today. I believe that we have come far in confronting these issues in our society, but progress will not continue without remembering where we were in the past. Manuel Dunegan and others did not have the opportunity in life to be influential, but a century later their stories’ can be a driving force for many.